Why Vaccination Camps Within Societies Is A Welcome Step

Why Vaccination Camps Within Societies Is A Welcome Step 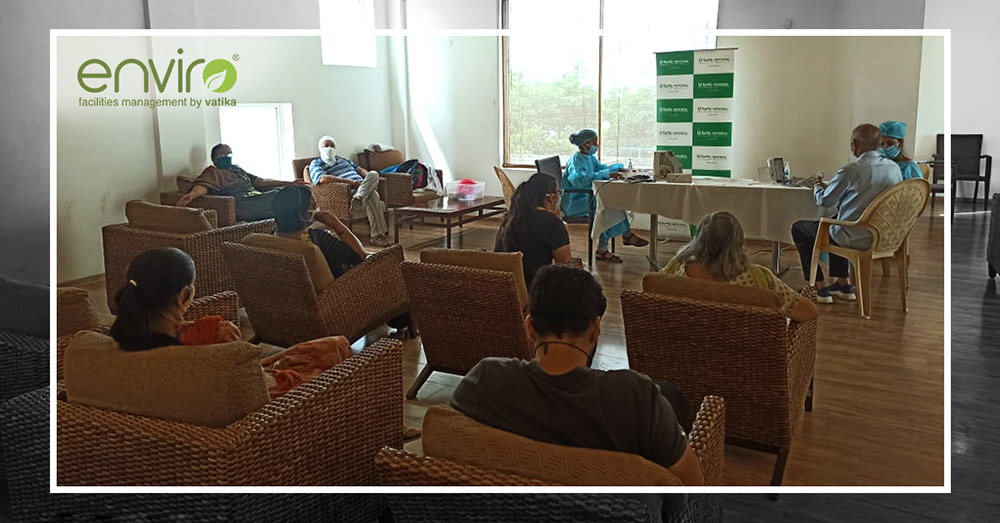 The role of facility management

Ever since, Covid-19 came to our shores, we have been learning about this virus. Scientists are working at war like pace to come up with a vaccine. Now, the stories evolving says about new variants which are more difficult to diagnose. The regular RT-PCR test are coming Negative for people who have all the symptoms of the virus.

Thankfully, many pharma companies have come out with vaccines to fight the virus, namely, Covishield, Covaxin, Sputnik, Moderna, J&J and Pfizer have come up with their own vaccines. Some of the vaccines are based on mRNA / Viral vector or Inactivated Virus model. Some need 2 shots and some 1. Efficacy of each vaccine also varies.

In this second wave, which has seen counts rising to Lakhs and deaths by thousands. It’s imperative the vaccine is administered to the masses at the earliest. Government has bifurcated the age group into 18+ to 44 yrs and 45yrs and above. Primarily the agencies are trying to inoculate the 45+ as they are more susceptible and given the large population and the vaccine available. Given the magnamity of the situation, the efforts were falling short as reaching out to the masses while keeping precautions in mind was becoming a challenge for the government.

In such scenario the private hospitals played their part by organizing Vaccination camps at the residential societies for all age groups. Enviro, The Integrated Facility Management services company ties up with major Hospitals like Max, Fortis, Birla and Columbia Asia for conducting camps in societies operated by them. Enviro played its part of the facility management company by organizing them at the earliest in different days and more than 450 residents got their jab. This close coordination helped the residents to not venture out. The beauty was that there was no age restriction and none for doses too once parameters are met.

During lockdown 1 & 2 and also during the time when people all over the country were picking their life together after lockdown, Enviro, continued with making the residents life easier by doing home delivery of essentials, medicines were procured and sent to Covid affected homes. Many Sr citizens, pregnant ladies and handicapped people were not able to go to the private hospitals and to PHC’s. In this regard, again, holding a camp became very beneficial. As they would have to be not travel outside the society plus more space for following the norms of social distancing which might not be adhered at public hospitals. Post Vaccination, the residents were asked to wait for 30 minutes to check if there are any effects that one may have from the vaccine. Snacks were also given to the people who turned up.

The residents, RWA and citizen groups widely appreciated our effort. In the coming days, Camps are being organized at Sec 71 & 81, both of these are done by Birla hospital. Till the time the PHC doesn’t come to Societies, relaying on pvt sector Hospitals for vaccine is the best and safest bet for residential societies.

We are in the process of getting a FREE Vaccination Camp for the underprivileged at Matrikiran School. This is being done in association with VCARE NGO. The more numbers we can get people to get vaccinated, that’s how well our preparation would be against COVID 19.

The Corona Virus can be eradicated once and for all only by vaccination of the masses, it will be long process and we are proud to do our bit.

The activity of arranging such camps at so many societies also earned us a few media coverages.